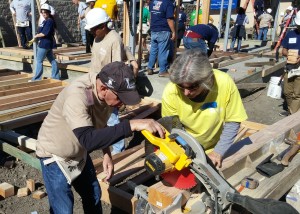 On November 11, the MVAT Foundation contingent, led by board members Tom Rooney and Larry Schnadig, joined more than 100 volunteers, the majority of which were Veterans and military personnel, to help build a home for a Veteran family.

Since 2011, more than 100 low-income Veteran-owned homes received repairs and non-cosmetic improvements to help alleviate health and safety issues. In 2015, 30 homes were repaired and 3 new homes were either under construction or delivered to low-income Veteran families in the Los Angeles area. The homes are not given away but are provided in a partnership that allows for low mortgage payments along with other accommodations as well as strict homeowner requirements.