The Ratkovich Company in the Sponsor Spotlight

Since the MVAT Foundation’s beginning, The Ratkovich Company has been a steadfast supporter. Their sponsorship has proved to be instrumental to our success in providing resources to assist Veterans, wounded warriors, and their families. We could not be more pleased to feature The Ratkovich Company as the first in a series of supporter profiles we call the Sponsor Spotlight and featured in our new monthly e-newsletter. The following was provided to us by our friends at The Ratkovich Company.

The Ratkovich Company (TRC) is engaged in city building. The company’s mission is to profitably produce developments that improve the quality of urban life. In its simplest form, our business is producing physical environments that are pleasing to people. Shaping our environment is important work that will touch the lives of many for generations and perhaps centuries to come. 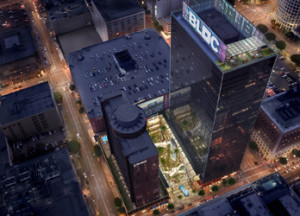 TRC’s development history has many examples of the firm’s ability to create profit and value not easily seen by others. In various instances the company has created investment opportunity by bringing a new vision into reality and by creating order out of chaos; and from vision and order has come profit.

The Company’s focus on urban infill and rehabilitation projects recognizes that the substantial growth that is forecast for Southern California, the Company’s primary market, will largely be accommodated by making more efficient use of land and buildings in areas previously settled. Constrained by an ocean, a mountain range and a desert, Southern California’s growth is being channeled into areas where the Company has focused its unique expertise.

The Newest Project – THE BLOC

In ancient Greece, the Agora was a marketplace and meeting place that represented the cultural heartbeat of every major city. THE BLOC, which occupies an entire city block in the heart of resurgent downtown Los Angeles, will be a modern version of the ancient Agora, a vibrant and eclectic cultural and commercial destination that will be a magnet for both locals and visitors from around the world. The Ratkovich Company, the property’s new owner and developer, is transforming the almost 2 million square foot property into an international destination to lead an accelerating Downtown LA renaissance.