U.S. Army Captain Florent Groberg, America’s newest recipient of the Medal of Honor, the nation’s highest military honor that is awarded for personal acts of valor above and beyond the call of duty, met MVAT Foundation leadership on November 20 in El Segundo, California. Captain Groberg received the Medal of Honor on November 12, 2015 at a White House ceremony. 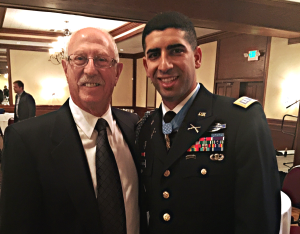 Responsible for the security of a group of senior officers and USAID officials in Asadabad, Kunar, Afghanistan, on August 8, 2012 Captain Groberg spotted and then physically prevented a suicide bomber from closing with a command team he and his men were escorting to a meeting with a senior Afghani official. As Captain Groberg tackled him, the bomber detonated his explosive vest. Hearing the explosion, a second suicide bomber detonated his vest prematurely. Though he miraculously survived the blast, Captain Groberg sustained career-ending wounds. His quick actions and immense bravery that day saved the lives of many members of his team.