At MCAS Miramar, MVAT Gained a Greater Understanding of Today’s Military and the Veterans of Tomorrow

The MVAT Foundation’s inaugural Military Education Base Visit Program began with a day-and-a-half of briefings and hands-on experiences at Marine Corps Air Station (MCAS) Miramar, home to the 3rd Marine Aircraft Wing (3MAW) in mid-July. The opportunity to meet and spend time with young men and women serving our country today and to experience elements of their working lives allows for a deeper connection to the challenges they will face when they eventually separate from the military and join the civilian workforce. MVAT Foundation participants gained invaluable knowledge about those serving in today’s U.S. military and the needs of the veterans of tomorrow. 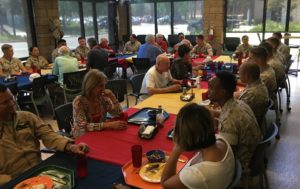 The visit kicked off with an orientation in the Officers Club, where the entire history of MCAS Miramar and the squadrons that called it home over the years can be seen in the dozens of patch collections, memorabilia, photos and signs that cover the walls of the bar room. Later, a private dinner was held for MVAT Foundation participants with MCAS Miramar command staff. The next day began early with briefings on the state of the Marine Corps today and 3MAW’s current deployments, which span the globe.

The delegation next visited the Aviation Survival Training Center, where Marine and Navy pilots and aircrew learn skills necessary to survive aircraft ditchings at sea. Participants were allowed full access to a CH-53E heavy transport helicopter and its crew as well as to an F/A-18D Hornet fighter aircraft. 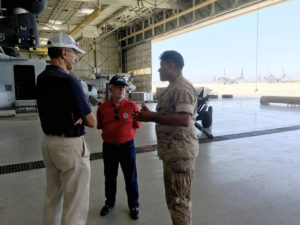 Participants speak with an MV-22 Osprey maintainer at MCAS Miramar.

Next on the agenda was lunch with 14 young (19 to 23 years old) Marines in the main chow hall. The full hour allotted to this portion of the program was critical as it allowed for real conversations to take place. MVAT Foundation participants were able to learn their motivations for enlisting, their experiences thus far, and for how much longer they intended to stay in the Corps. And, if they were planning on leaving, the reasons why. The fact is that 90 percent of those young Marines will become veterans within the next 7 years.

After lunch, the group paid a fascinating visit to the Air Traffic Control/Ground Control Approach tower, where participants observed Marines controlling the air traffic for dozens of miles around the air station. MCAS Miramar is close to one major and several smaller airports, which makes for a very crowded airspace.

The next stop was the MV-22 maintenance hangars. In the hangers, participants were able to examine the cutting-edge tilt-rotor transport aircraft up close and talk with the Marines that maintain them.

The final stop of the day was the flight line, where MVAT Foundation participants were able to closely observe F/A-18D fighters taking off on flights to practice missions over the Pacific Ocean.