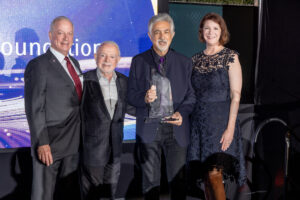 Actor, producer, and lauded veterans advocate Joe Mantegna received the MVAT Foundation’s 2022 Don Schwarz Distinguished Service Award. Seen here on stage during the October 8 Gala with (left to right) MVAT Chairman Doug Berl, Award Presenter Howard M. Bernstein, and Kat Schwarz, wife of the late Don Schwarz, MVAT’s founder and longtime Board Chair for whom the award was named in recognition of his passionate advocacy for America’s veterans and their families.

The awards dinner kicked off with a Presentation of the Colors by the U.S. Army’s Los Angeles Recruiting Battalion who were joined on stage by some of the evening’s honored guests including five recipients of the Medal of Honor, America’s highest award for valor in combat. Medal of Honor recipient and MVAT Board Member Jack Jacobs led the attendees in the Pledge of Allegiance and Medal of Honor recipient Jim McCloughan sang the National Anthem.

MVAT’s program achievements were featured during the pre-dinner portion of the Gala. The Veteran’s Home Repair pilot program, carried out in partnership with Habitat for Humanity of Greater Los Angeles, provides critically needed home repairs so that aging veterans can continue to reside in their homes in comfort and safety. Service-disabled U.S. Air Force veteran Daniel Munoz, Sr. received needed repairs to his Whittier, California home carried out by an MVAT team that counted three Medal of Honor recipients, Board Members, and supporters. A video of the effort was shown to the audience and at its conclusion Mr. Munoz took the stage to express his gratitude in a moving address. The pilot program also attracted multiple news television and print outlets. View KABC’s coverage of the Veteran’s Home Repair Pilot Program.

Heroes Linked, MVAT’s flagship program, was highlighted through the presentation of a video spotlighting veterans who have benefited from Heroes Linked. 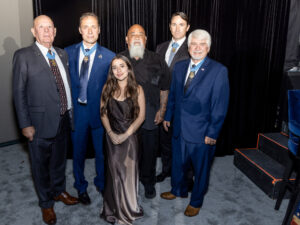 Heroes Linked’s emphasis on post-military service career success for veterans is more important than ever. The biggest challenge facing veterans today is establishing positive post-service careers. Heroes Linked is a powerful tool to help overcome that challenge. It provides to veterans across the country the critically needed services of mentoring, advising, and networking in an easy to use online platform. Job acquisition, which was a major focus in the wake of the 2009 recession, is no longer an issue relative to assisting veterans to navigate their employment and build careers. As of October 2022, according to the Bureau of Labor Statistics, the unemployment rate for all U.S. veterans was 2.5% while the rate for the U.S. labor force as a whole stood at 3.7%.

Heroes Linked will continue its efforts to mentor, guide,  and prepare veterans as well as active duty service members separating from service and Gold Star family survivors to transition to the private sector workforce on equal ground and thrive in the careers with those who have not served or who have not lost a loved one in service to country.

Next, the audience was treated to a moving video tribute to Advisory Board Member Maj. Gen. (ret.) Mark Graham and his wife Carol was shown. The video was a segment from the nationally televised 2022 Memorial Day PBS Special from the Mall in Washington DC. In the segment, Joe Mantegna and actress Joan Smart portrayed Mark and Carol and told the story of their two sons’ deaths in the first person. In an incredibly moving and emotional moment, Mark and Carol were joined on stage by a tearful Joe Mantegna. 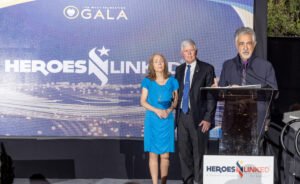 Maj. Gen. (ret.) Mark Graham and his wife Carol on stage at the Gala as Honoree Joe Mantegna talks about his experience portraying Mark Graham during a segment of the nationally televised Memorial Day Concert on the Mall, which he co-hosted. During the segment, the actress Jean Smart portrayed Carol Graham. Mark is a member of the MVAT Board of Advisors.

The program to present the Don Schwarz Distinguished Service Award to actor, producer, and supporter of the men and women serving in uniform Joe Mantegna followed a lively charity auction fundraiser and dinner service. Don Schwarz founded the MVAT Foundation in 2009 and served as its Chairman and guiding light until a few months before his May 2021 passing.

Beginning with a video showcasing Joe’s efforts over the past two decades in support of veterans and the U.S. Armed Forces, Board Chair Doug Berl delivered remarks about Don and introduced Don’s wife Kat who joined him on stage for the presentation. Board Vice Chair Bob Jerome introduced a video tribute from fellow actor and renowned veterans advocate and philanthropist Gary Sinise. Perennial MVAT supporter Howard M. Bernstein next introduced Joe Mantegna and presented him with the Don Schwarz Distinguished Service Award. Joe delivered a response that was both eloquent and heartfelt.

The evening concluded with the drawing of the winning ticket in the AmaWaterways-sponsored 7-Day Luxury European River Cruise raffle. After Board Member and Raffle Chair Corinne Goodman spoke about the annual fundraising effort, Medal of Honor Recipient Gary Littrell pulled the winning ticket. The winners were Kristin and Tim Sprinkle of Denver, Colorado. With that, the 2022 MVAT Foundation Gala came to a close.